High Street 2.0 - Understanding the Next Generation Retail High Street
Posted by RT at 09:26

With the standard flurry of predictions at the start of every year, it's always hard to pick out the value from the vast swathes of text that fill up the multitude of published articles. To make it easier I've distilled out some pointers towards what I believe are the key trends you should be keeping an eye on for 2009.

[Trends originally posted by me on my work blog]

Could The Retail Industry Save Itself Using Game Theory?

In my previous post on whether the Christmas Sales have destroyed hopes of a retail recovery, I discussed how retailers have exhibited classic non-cooperative behaviour. By focusing only on individual interest and survival, their collective actions have likely damaged their entire industry's market size. By encouraging people to spend their liquidity faster through low prices in over-competitive price wars, people now facing redundancies will run out of spending ability much quicker, and retailers give themselves no time to be able to adapt to reducing market sizes and changing consumer need.

Retailer actions thus suggest a basic lack of understanding of collective strategic options. Even just a basic group recognition of Game Theory might have helped. Game theory attempts to model behavior in strategic situations, where players interact and make decisions to maximise their returns based on each others choices - arguably leading to optimal behaviour for all. The classic example is the 'Prisoner's Dilemma' which involves two participants who can either benefit together or suffer together. However this is a zero sum game and rational behaviour in this model is self-interest, so consequently the optimal solution is never chosen.

In a normal situation the retail space would probably be modelled as a non-zero sum game. One firm's success does not necessarily mean losses for everyone else, because that success may increase the general size of the market to mean success for all players. However in the current economic climate, it looks more like there is a finite and decreasing amount of money that people have to spend, and therefore a limited resource available to all players, bringing the situation closer to a zero sum game.

For retailers, what Game Theory therefore suggests is that the players can either try and maximise their own gain, in which case some will come out well while others do badly, involving high risk for everyone; or they can all cooperate strategically to all do a little less well but significantly minimise each player's risk of severe failure.

What retailers should have done, is considered working together to keep prices sensible, and thus manage both the market and their ability to stay alive long enough to change with the environment. On balance, all companies who aren't over-leveraged, would benefit and be better off as a group.

Trying to gain maximum benefit for themselves however, probably means that many will end up with little or no benefit at all as their behaviour helps ensure the market collapses. Unfortunately we must accept that historical competitive and non-collaborative behaviour means that there's very little realistic chance of retailers co-operating like this even now, so we should probably start preparing for further insolvencies and more job losses.
Posted by RT at 15:20

Have the Christmas Sales Destroyed Hopes of a Retail Recovery?

It is finally January and the industry is slowly recovering from the Christmas frenzy. The smoke is clearing to leave retailers facing the start realities of 2009, and the January slowdown is giving businesses time to reflect on the follies of collective price-slashing hysteria.

Personally, I have a feeling that the unprecedented reductions in the 2008 Christmas sales are going to accelerate the bankruptcy of most retailers, rather than saving them. I believe this for two reasons.

Long and short of it is that by indulging in short termist price wars, retailers have simply dug their own graves.
Posted by RT at 16:10

Is The Future Of Business Going To Be Telepathic Technology?

Let's kick off 2009 with a bit of exciting futurism! Here's an interesting talk on advances in cyborg technology and what it might mean for business.

Is the future of business going to be telepathic technology? Will people be able to pay for stuff simply by connecting electrodes? Are we going to need computer screens or will we shift to 3D or sensory electronic shopping? What will it mean for web or ecommerce design? Will it mean the end of the mobile phone if we can simply receive signals internally? Have a listen and see what Kevin Warwick thinks...
Posted by RT at 13:30 No comments:

A key element in the success of organisations is their ability to capture, manage and share knowledge, learning and best practice amongst the workforce. However knowledge is often confused with information, and thus organisations typically address the issue by implementing mechanisms for collating documented information and making it available for people to access. (See my earlier post on Developing Knowledge Sharing Communities for Business)

What this usually results in is some form of electronic library available through intranet or shared folder access, but little or no attempt to encourage discussion and evolution of that information for wider organisational use. People are left with the responsibility of connecting disparate bits of information into appliable knowledge. The amount of effort needed to do this is often prohibitive and the result is that people typically ignore the majority of information available to them and organisations are unable to leverage the pools of knowledge they hold.

Studies show that innovation arises at the confluence of knowledge from different fields, so in economic downturns like this, surfacing and sharing knowledge could be a crucial factor in survival.

In light of that, here's a quick look at the different avenues that people use to find and engage with information. 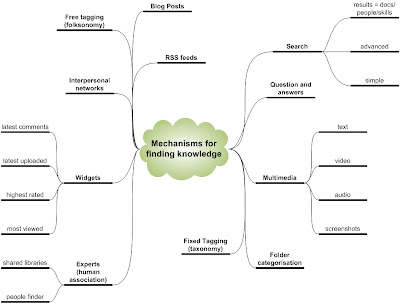 As more and more business begin to appreciate the value of managing and monitoring social conversations to build their brand and reputation, marketers are beginning to move away from focusing manual search, monitoring, trafficking, and tracking. Instead, many aggregation and tracking tools, in addition to stealth services not yet launched, are not only helping track keywords, but also monitor conversations across the networks and communities that you know and don't know. They effectively map, engage, and manage participation efforts allowing businesses to start to implement and benefit from CRM-style (customer relationship management) dashboards and hubs to streamline internal and outbound communications.